Portrait of the Duke of Sully at The State Hermitage Museum, St Petersburg

3D
Scan The World
2,356 views 145 downloads
1 collection
Community Prints Add your picture
Be the first to share a picture of this printed object
0 comments

Portrait of the Duke of Sully at The State Hermitage Museum, St Petersburg

Maximilien de Béthune, the 1st Duke of Sully (13 December 1560 – 22 December 1641) was a nobleman, soldier and statesman, faithful right-hand man who assisted king Henry IV of France in the rule of France. Historians emphasize Sully's role in building a strong centralized administrative system in France using coercion and highly effective new administrative techniques. His policies were not original, and most were reversed. Historians have also studied his neo-Stoicism and his ideas about virtue, prudence, and discipline.

The Pavillon Sully (Pavillon de l'Horloge) of the Palais du Louvre is named in honor of the Duc de Sully.

Marie-Anne Collot (1748 – 24 February 1821) was a French sculptor. She was the student and daughter-in-law of Etienne Falconet and is most well known as a portraitist, close to the philosophic and artistic circles of Diderot and Catherine the Great to whom she donated this bust. 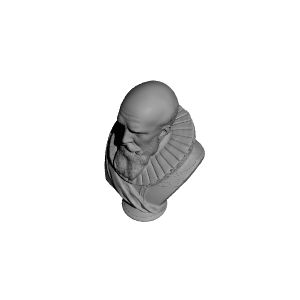 ×
1 collections where you can find Portrait of the Duke of Sully at The State Hermitage Museum, St Petersburg by Scan The World