Portrait of the Emperor Nero as a Youth at The State Hermitage Museum, St Petersburg

3D
Scan The World
2,524 views 75 downloads
Community Prints Add your picture
Be the first to share a picture of this printed object
0 comments

Portrait of the Emperor Nero as a Youth at The State Hermitage Museum, St Petersburg

Portraits of representatives of the Roman Julio-Claudian imperial dynasty have much in common, for officially they had all to display a likeness to the founder of the dynasty, Octavian Augustus. This likeness was not purely a matter of facial features, for tradition prescribed that images of members of the ruling family should be noble, restrained and calm. Executed in just such a style is this marvellous head of a young man, brought to St Petersburg from the Greek islands by Admiral G.A. Spiridov in 1774. The Greek artist gives the relief locks of hair somewhat summary treatment, modelling the surface of the face finely and softly. The individual features of the young man's appearance are the deep-set eyes, the childishly round cheeks and the projecting chin. In comparing this portrait with images of the young Nero on coins, scholars have suggested that the Hermitage bust shows Nero at the beginning of his rule (54 AD). Through his mother, Agrippina the Younger, Augustus's great-granddaughter, Nero was the last direct heir to the founder of the dynasty. According to the Roman historian Suetonius, Nero's father Gnaeus Domitius Ahenobarbus was "a man most vile at every time of his life"; learning of the birth of his son, "he cried out that from himself and Agrippina nothing could be born save horror and sorrow for humanity". Adopted by his step-father, the Emperor Claudius (41-54 AD), at 17 years old Nero became ruler of Rome. This bust dates from the time when Nero had announced that he would "rule along the lines of Augustus" and when he had not yet begun to display his despotic character. 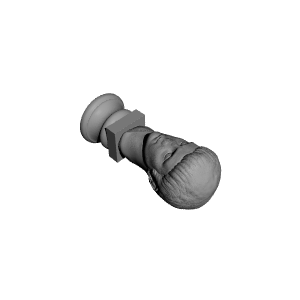 ×
0 collections where you can find Portrait of the Emperor Nero as a Youth at The State Hermitage Museum, St Petersburg by Scan The World