3D
Scan The World
3,432 views 158 downloads
1 collection
Community Prints Add your picture
Be the first to share a picture of this printed object
0 comments

Pottery amphora with applied jewel motifs and grotesque heads (neck and handles missing). During the Southern and Northwestern dynasties this jewel motif and other applied designs were adopted by Chinese potters further east for use on glazed ceramics.  From Yotkan, capital of the kingdom of Khotan, modern Xinjiang Province.

An amphora (English plural: amphorae or amphoras) is a type of container of a characteristic shape and size, descending from at least as early as the NeolithicPeriod. Amphorae were used in vast numbers for the transport and storage of various products, both liquid and dry, but mostly for wine. It is most often ceramic, but examples in metals and other materials have been found. The amphora complements the large storage container, the pithos, which makes available capacities between one-half and two and one-half tons. In contrast, the amphora holds under a half-ton, typically less than 100 pounds. The bodies of the two types have similar shapes. Where the pithos may have multiple small loops or lugs for fastening a rope harness, the amphora has two expansive handles joining the shoulder of the body and a long neck. The necks of pithoi are wide for scooping or bucket access. The necks of amphorae are narrow for pouring by a person holding it by the bottom and a handle. Some variants exist. The handles might not be present. The size may require two or three handlers to lift. For the most part, however, an amphora was tableware, or sat close to the table, was intended to be seen, and was finely decorated as such by master painters.

Stoppers of perishable materials, which have rarely survived, were used to seal the contents. Two principal types of amphorae existed: the neck amphora, in which the neck and body meet at a sharp angle; and the one-piece amphora, in which the neck and body form a continuous curve. Neck amphorae were commonly used in the early history of ancient Greece, but were gradually replaced by the one-piece type from around the 7th century BC onward. Most were produced with a pointed base to allow upright storage by embedding in soft ground, such as sand. The base facilitated transport by ship, where the amphorae were packed upright or on their sides in as many as five staggered layers. If upright, the bases probably were held by some sort of rack, and ropes passed through their handles to prevent shifting or toppling during rough seas. Heather and reeds might be used as packing around the vases. Racks could be used in kitchens and shops. The base also concentrated deposits from liquids with suspended solid particles, such as olive oil and wines.

Amphorae are of great use to maritime archaeologists, as they often indicate the age of a shipwreck and the geographic origin of the cargo. They are occasionally so well preserved that the original content is still present, providing information on foodstuffs and mercantile systems. Amphorae were too cheap and plentiful to return to their origin-point and so, when empty, they were broken up at their destination. At a breakage site in Rome, Testaccio, close to the Tiber, the fragments, later wetted withCalcium hydroxide (Calce viva), remained to create a hill now named Monte Testaccio, 45 m (148 ft) high and more than 1 km in circumference.

Printed by PRINT3Dforum.com Printing Services - Little support required, you could try with none. I tried with vase mode with no luck in a BQ Witbox. May be you have more luck. Feel free to share your settings if you do! 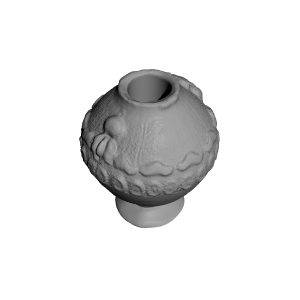 ×
1 collections where you can find Pottery Amphora at The British Museum, London by Scan The World