Pottery figure of a drummer at The British Museum, London

3D
Scan The World
1,936 views 90 downloads
2 collections
Community Prints Add your picture
Be the first to share a picture of this printed object
0 comments

Pottery figure of a drummer at The British Museum, London

Trumpets, flutes and rattles combined with the rhythms of drums to enliven festivals and other communal celebrations. This musician boasts a flamboyant headdress, adonments and costume. Drumming was also instrumental in invoking the presence of ancestral spirits.

At least six styles of ceramic sculptures are found in Jalisco, West Mexico, some of them limited to a specific area or time period. In comparison to the ceramics of Colima and Nayarit though, the subject matter in this region is quite limited.These two sculptures belong to a group commonly called 'sheep-faced' figures, after their pointed noses and ears and elongated heads. The ears are adorned by earplugs. The slip that covers the figures is a glossy red and the details of clothing and ornament are painted in white. Here the woman is wearing earplugs and a necklace, and a typical wrap skirt. The drummer wears the same ornaments and a mantle over one shoulder, characteristic of male figurines. Women usually hold a vessel or cup and men are seen playing musical instruments or holding a variety of objects. Eating, drinking and playing music are also the subject of many scenes represented in ceramic models from the neighbouring Nayarit region.Although these figures are usually presented as a pair, most come from looted shaft tombs and may have been paired at a later date based purely on stylistic similarities. 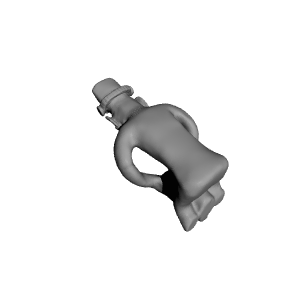 ×
2 collections where you can find Pottery figure of a drummer at The British Museum, London by Scan The World