3D
Scan The World
1,650 views 80 downloads
1 collection
Community Prints Add your picture
Be the first to share a picture of this printed object
0 comments

After the first flowering of Olmec culture, the focus of Gulf Coast civilisation gradually shifted northward to the regional capital and ceremonial centre of El Tajin. A vigorous and distinctive art style spread from southern Veracruz, eventually to exert an influence at Teotihuacan and the Toltec capital of Tula in the central highlands.

A constant flow of ideas and trade strengthened the connections between the Gulf Coast lowlands and successive highland cultures. One expression of this was the development of a ritual ball game, variants of which were widely adopted throughout Mesoamerica. Sanctuaries and shrines which originally formed the focus of local cults became part of a more extensive 'sacred geography' that embraced mountains, lakes and islands. Over the centuries seasonal rites and ceremonies were incorporated into an agricultural calendar which revolved around the seasons. 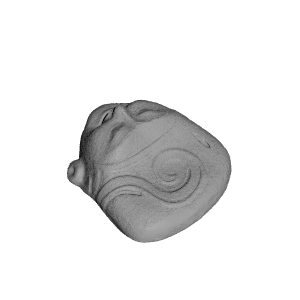 ×
1 collections where you can find Pottery Smiling Head 2 at The British Museum, London by Scan The World