3D
Scan The World
1,755 views 72 downloads
Community Prints Add your picture
Be the first to share a picture of this printed object
0 comments

Large, almost life-size, pottery figurines may have been placed as attendants or guardians in close proximity to cult images in the temples on Isla de Sacrificios. The figure on the right displays filed teeth. Olmec culture finds its highest expression in what is known as the Olmec heartland on the Gulf Coas of Mexico. In this lowland, riverine setting, well-planned political and ceremonial centres such as San Lorenzo, Tres Zapotes, Laguna de los Cerros and La Venta emerged in the late second millennium BC. These settlements featured public plazas, impressive earthen platform architecture and colossal stone scultpures of Olmec rulers. Archaeologists have also uncovered traces of ceighbouring residential communities. SKilled artisans worked jade which was brought into the region through long-distance trade. The Olmec art style frequently depicts tropical forest creatures, the caiman, jaguar and eagles, engraved on monuments and porable artefacts. Some objects are founf as far afield ad the Valley of Mexico and the Pacific Coast. These images point to widely shared belifs that recur in many later Mesoamerican traditions. 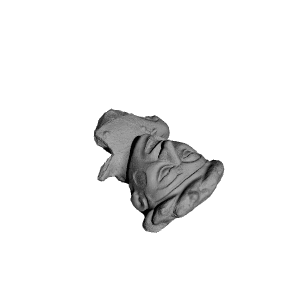