3D
Support Free Scan The World
1,560 views 66 downloads
Community Prints Add your picture
Be the first to share a picture of this printed object
0 comments

Dating from 11-14th Century this monolith presented by Didier Claes, Brussels, was one of 16 works on public display at Frieze Sculpture Park (2015).

The monoliths of north-east Nigeria were erected alone or in groups in special areas on the edge of the villages where community activities were held. An emblem of the Eblabu secret society (a secret society responsible for enforcing death sentences in the event of a violation of the community law), monolithic sculptures such as this formerly stood in hundreds in many villages of the Cross River region. Reported for the first time at the very beginning of the 20th century, today they have almost totally disappeared. Originally arranged in circle in the centre of the villages, they were very often moved and reused during highly varied ceremonies. The monoliths were buried up to the navel and every year painted white, yellow and blue. 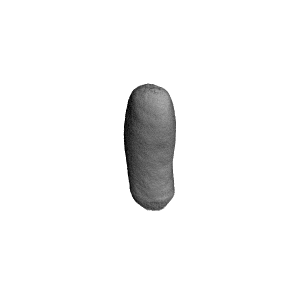