Profesor from the Academy of Arts : Vladimir Aleksandrovich Beklemishev

3D
Scan The World
3,156 views 71 downloads
Community Prints Add your picture
Be the first to share a picture of this printed object
0 comments

Profesor from the Academy of Arts : Vladimir Aleksandrovich Beklemishev

In 1878 Beklemishev moved to Saint Petersburg and started his studies at the Imperial Academy of Arts. He chooses the sculpture class. His teachers were Alexander von Bok and Nikolay Laveretsky (ru). In 1885 Beklemishev already had received three Lesser Silver Medals and one Grand Silver Medal from his Academy. In 1886 he received the Academy's Grand Gold Medal for his sculpture "The Entombment" (Положение в Гроб) that gave him his right for a government stipend to study abroad. In January 1888 he moved to Paris then to Rome. The most remarkable Beklemishev's sculpture of the Rome period is the "Early Christian Woman". She also made his first sculpture portraits then.

During that time he chiselled a number of sculpture portraits including the sculptures of physicist Nikolay Beketov, painter Konstantin Makovsky, musicians Mitrofan Belyayev and Vasily Safonov. In 1914 he cut a bust of painter Arkhip Kuindzhi that was set on the artist's grave (now on Tikhvin Cemetery in Saint Petersburg).
He also made large sculptures for monuments in public spaces, including monument to Pyotr Ilyich Tchaikovsky for the Saint Petersburg Conservatory (1897), monument to Alexander Griboyedov for the Russian Embassy in Tehran, Iran; monument to Yermak Timofeyevich in Novocherkassk. In 1908 Beklemishev chiselled monument to doctor Sergey Botkin installed at the entrance to the Imperial Military Medical Academy.In summer 1917 Beklemishev was a member of the commission preparing the new constitution of the Academy and the head of the Petrograd Department for Protections of Historical and Artistic monuments (уполномоченный отдела охраны памятников старины и искусства в Петрограде). On 6 September 1919 he was arrested by Cheka for his membership in the Constitutional Democratic Party. On 18 September 1919 he was released from the jail, on 1 December 1919 he was forced to move from Petrograd (St. Peterburg) to Novorzhev in Pskov Governorate there he died on 21 December 1919. 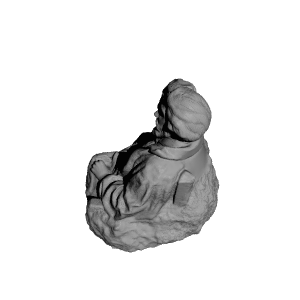 ×
0 collections where you can find Profesor from the Academy of Arts : Vladimir Aleksandrovich Beklemishev by Scan The World