The Abandoned Psyche is a marble sculpture by Augustin Pajou (Paris, 1730 - Paris, 1809) completed in 1790. The statue was commissioned for the Royal Buildings, in 1783, to serve as a piece to compliment Edmé Bouchardon's 'Amour se taillant un arc' (Cupid Cutting His Bow from Hercule's Club, also uploaded on the Scan The World archive). The plaster model was exposed in the Salon in 1785, but the integral nudity of the sculpture and the realism of Psyche's grieving face caused a scandal, and the artwork was retired from the building. Mounted from thereon in a sculptor's workshop, the piece was forgotten about. The piece depicts the story of Psyche and Cupid in the Metamorphoses book by Aupleius. Psyche's quest to win back Cupid's love when it is lost to her first appears inThe Golden Ass of Lucius Apuleius in the 2nd century AD. Psyche is a princess so beautiful that the goddess Venus becomes jealous. In revenge, she instructs her son Cupid to make her fall in love with a hideous monster; but instead he falls in love with her himself. He becomes her unseen husband, visiting her only at night. Psyche disobeys his orders not to attempt to look at him, and in doing so she loses him. In her search for him she undertakes a series of cruel and difficult tasks set by Venus in the hope of winning him back. Cupid can eventually no longer bear to witness her suffering or to be apart from her and pleads their cause to the gods. Psyche becomes an immortal and the lovers are married in heaven. 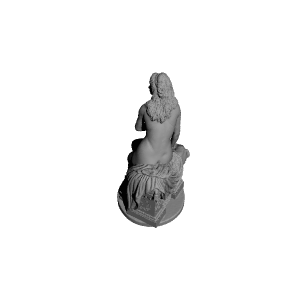 ×
6 collections where you can find Psyche Abandoned at The Louvre, Paris by Scan The World
×
Noah Knight
@3dknight
1
Printed on: Delta Tower
Material: PLA
Posted at: 17th May 2022