Psyche at The Louvre, Paris

Psyche at The Louvre, Paris

Psyche ( "Soul" or "Breath of Life") appear in Greek art as early as the 4th century BC. The story's Neoplatonic elements and allusions to mystery religions accommodate multiple interpretations, and it has been analyzed as an allegory and in light of folktale, Märchenor fairy tale, and myth.

Since the rediscovery of Apuleius's novel in the Renaissance, the reception of Cupid and Psyche in the classical tradition has been extensive. The story has been retold in poetry, drama, and opera, and depicted widely in painting, sculpture, and even wallpaper.  Psyche's Roman name through direct translation is Anima. There was once a king and queen, rulers of an unnamed city, who had three daughters of conspicuous beauty. The youngest and most beautiful was Psyche, whose admirers, neglecting the proper worship of the love goddess Venus, instead prayed and made offerings to her. It was rumored that she was the second coming of Venus, or the daughter of Venus from an unseemly union between the goddess and a mortal. Venus is offended, and commissions Cupid to work her revenge. Cupid instead scratches himself with his own dart, which makes any living thing fall in love with the first thing it sees. As soon as Cupid scratches himself he falls deeply in love with Psyche and disobeys his mother's order to make Psyche fall in love with something hideous.

Psyche is arrayed in funeral attire, conveyed by a procession to the peak of a rocky crag, and exposed. Marriage and death are merged into a single rite of passage, a "transition to the unknown". Zephyr the West Wind bears her up to meet her fated match, and deposits her in a lovely meadow , where she promptly falls asleep. The transported girl awakes to find herself at the edge of a cultivated grove . Exploring, she finds a marvelous house with golden columns, a carved ceiling of citrus wood and ivory, silver walls embossed with wild and domesticated animals, and jeweled mosaic floors. A disembodied voice tells her to make herself comfortable, and she is entertained at a feast that serves itself and by singing to an invisible lyre. Although fearful and without sexual experience, she allows herself to be guided to a bedroom, where in the darkness a being she cannot see makes her his wife. She gradually learns to look forward to his visits, though he always departs before sunrise and forbids her to look upon him, and soon she becomes pregnant. Psyche's family longs for news of her, and after much cajoling, Cupid, still unknown to his bride, permits Zephyr to carry her sisters up for a visit. When they see the splendor in which Psyche lives, they become envious, and undermine her happiness by prodding her to uncover her husband's true identity, since surely as foretold by the oracle she was lying with the vile winged serpent, who would devour her and her child. One night after Cupid falls asleep, Psyche carries out the plan her sisters devised: she brings out a dagger and a lamp she had hidden in the room, in order to see and kill the monster. But when the light instead reveals the most beautiful creature she has ever seen, she is so startled that she wounds herself on one of the arrows in Cupid's cast-aside quiver. Struck with a feverish passion, she spills hot oil from the lamp and wakes him. He flees, and though she tries to pursue, he flies away and leaves her on the bank of a river.

There she is discovered by the wilderness god Pan, who recognizes the signs of passion upon her. She acknowledges his divinity (numen), then begins to wander the earth looking for her lost love. Psyche visits first one sister, then the other; both are seized with renewed envy upon learning the identity of Psyche's secret husband. Each sister attempts to offer herself as a replacement by climbing the rocky crag and casting herself upon Zephyr for conveyance, but instead is allowed to fall to a brutal death. In the course of her wanderings, Psyche comes upon a temple of Ceres, and inside finds a disorder of grain offerings, garlands, and agricultural implements. Recognizing that the proper cultivation of the gods should not be neglected, she puts everything in good order, prompting a theophany of Ceres herself. Although Psyche prays for her aid, and Ceres acknowledges that she deserves it, the goddess is prohibited from helping her against a fellow goddess. A similar incident occurs at a temple of Juno. Psyche realizes that she must serve Venus herself. Venus revels in having the girl under her power, and turns Psyche over to her two handmaids, Worry and Sadness, to be whipped and tortured. Venus tears her clothes and bashes her head into the ground, and mocks her for conceiving a child in a sham marriage. The goddess then throws before her a great mass of mixed wheat, barley, poppyseed, chickpeas, lentils, and beans, demanding that she sort them into separate heaps by dawn. But when Venus withdraws to attend a wedding feast, a kind ant takes pity on Psyche, and assembles a fleet of insects to accomplish the task. Venus is furious when she returns drunk from the feast, and only tosses Psyche a crust of bread. At this point in the story, it is revealed that Cupid is also in the house of Venus, languishing from his injury.At dawn, Venus sets a second task for Psyche. She is to cross a river and fetch golden wool from violent sheep who graze on the other side. These sheep are elsewhere identified as belonging to the Sun. Psyche's only intention is to drown herself on the way, but instead she is saved by instructions from a divinely inspired reed, of the type used to make musical instruments, and gathers the wool caught on briers.

For Psyche's third task, she is given a crystal vessel in which to collect the black water spewed by the source of the rivers Styx and Cocytus. Climbing the cliff from which it issues, she is daunted by the foreboding air of the place and dragons slithering through the rocks, and falls into despair.Jupiter himself takes pity on her, and sends his eagle to battle the dragons and retrieve the water for her.The last trial Venus imposes on Psyche is a quest to the underworld itself. She is to take a box (pyxis) and obtain in it a dose of the beauty of Proserpina, queen of the underworld. Venus claims her own beauty has faded through tending her ailing son, and she needs this remedy in order to attend the theatre of the gods (theatrum deorum).Once again despairing of her task, Psyche climbs a tower, planning to throw herself off. The tower, however, suddenly breaks into speech, and advises her to travel to Lacedaemon, Greece, and to seek out the place called Taenarus, where she will find the entrance to the underworld. The tower offers instructions for navigating the underworld: The airway of Dis is there, and through the yawning gates the pathless route is revealed. Once you cross the threshold, you are committed to the unswerving course that takes you to the very Regia of Orcus. But you shouldn’t go emptyhanded through the shadows past this point, but rather carry cakes of honeyed barley in both hands, and transport two coins in your mouth. The speaking tower warns her to maintain silence as she passes by several ominous figures: a lame man driving a mule loaded with sticks, a dead man swimming in the river that separates the world of the living from the world of the dead, and old women weaving. These, the tower warns, will seek to divert her by pleading for her help: she must ignore them. The cakes are treats for distracting Cerberus, the three-headed watchdog of Orcus, and the two coins for Charon the ferryman, so she can make a return trip.

Everything comes to pass according to plan, and Proserpina grants Psyche's humble entreaty. As soon as she reenters the light of day, however, Psyche is overcome by a bold curiosity, and can't resist opening the box in the hope of enhancing her own beauty. She finds nothing inside but an "infernal and Stygian sleep," which sends her into a deep and unmoving torpor.Meanwhile, Cupid's wound has healed into a scar, and he escapes his mother's house by flying out a window. When he finds Psyche, he draws the sleep from her face and replaces it in the box, then pricks her with an arrow that does no harm. He lifts her into the air, and takes her to present the box to Venus. He then takes his case to Jupiter, who gives his consent in return for Cupid's future help whenever a choice maiden catches his eye. Jupiter hasMercury convene an assembly of the gods in the theater of heaven, where he makes a public statement of approval, warns Venus to back off, and gives Psyche ambrosia, the drink of immortality, so the couple can be united in marriage as equals. Their union, he says, will redeem Cupid from his history of provoking adultery and sordid liaisons. Jupiter's word is solemnized with a wedding banquet. With its happy marriage and resolution of conflicts, the tale ends in the manner of classic comedy or Greek romances such as Daphnis and Chloe. The child born to the couple will be Voluptas, "Pleasure." 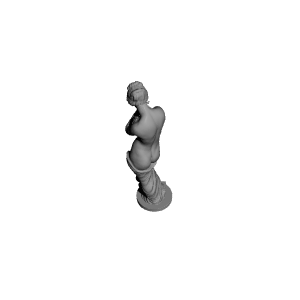 ×
10 collections where you can find Psyche at The Louvre, Paris by Scan The World
×
Angel Spy
@Angel Spy
1
Printed on: Prusa i3 MK2 Kit
Material: PLA
Posted at: 04th December 2021

it has some extra lines on left arm and bird looks like just some extra shapeless thing :/ rest is good