3D
Scan The World
2,046 views 81 downloads
Community Prints Add your picture
Be the first to share a picture of this printed object
0 comments

Ptolemy II Philadelphus (Greek: Πτολεμαῖος Φιλάδελφος, Ptolemaîos Philádelphos "Ptolemy Beloved of his Sibling"; 309–246 BCE) was the king of Ptolemaic Egypt from 283 to 246 BCE. He was the son of the founder of the Ptolemaic kingdom Ptolemy I Soter and Berenice, and was educated by Philitas of Cos. He had two half-brothers, Ptolemy Keraunos and Meleager, who both became kings of Macedonia (in 281 BCE and 279 BCE respectively), and who both died in the Gallic invasion of 280–279 BCE. Ptolemy was first married to Arsinoë I, daughter of Lysimachus, who was the mother of his legitimate children; after her repudiation he married his full sister Arsinoë II, the widow of Lysimachus. 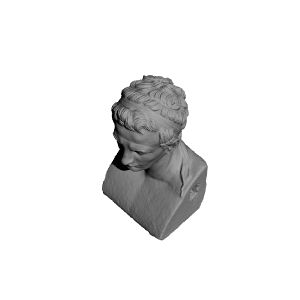