Quartz point from a ritual cache

3D
Scan The World
1,535 views 42 downloads
Community Prints Add your picture
Be the first to share a picture of this printed object
0 comments

Quartz point from a ritual cache

This quartz point was made by American Indians 3,000 to 6,000 years ago but was recovered archaeologically from a pit feature associated with a post-Civil War house occupied by an African American family on what is today Manassas National Battlefield Park. The 1880 census indicates that Philip and Sarah Nash, as well as their five children lived in this house at that time. The pit feature also contained six unmodified quartz crystals and a fragment of galena. Archaeologists interpret this as a ritual cache that resembles African spirit bundles (see Laura Galke, 2000, Free Within Ourselves. In “Archaeological Perspectives on the American Civil War,” edited by Clarence R. Geier and Stephen R. Potter, pages 253-269, University Press of Florida, Tallahassee). Object creation: This artifact was scanned at the National Park Services Museum Resource Center, located in Lanham, Maryland, using a NextEngine Desktop 3D scanner. Courtesy of the National Park Service-National Capital Region, Washington, D.C. 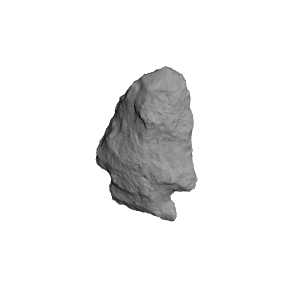