3D
Scan The World
4,938 views 143 downloads
2 collections
Community Prints Add your picture
Be the first to share a picture of this printed object
0 comments

The Terrace of the Elephants (Khmer: ព្រះលានជល់ដំរី) is part of the walled city of Angkor Thom, a ruined temple complex in Cambodia. Most of the original structure was made of organic material and has long since disappeared. Most of what remains are the foundation platforms of the complex. The terrace is named for the high relief carvings of elephants on its eastern face. Accompanying these elephants were sculptures like this lion, depicted in a complicated and dynamic posture playing with negative space, something incredibly rare for full sculptures of this time and period.

Symbolises protection of the temple.. . .

Louis Delaporte (January 11, 1842 — May 3, 1925) was a French explorer and artist, whose collection and documentation of Khmer art formed the nucleus of exhibitions in Paris, originally at the 1878 Paris Exposition[1] and later at the Palais du Trocadéro, where he became chief curator of the Musée Indochinois. In 1927, after his death, his collection was moved to the Guimet Museum.[2]

It is easy part, although there are some supports, easy to clean and no risk to brake model any part on the model. Enjoy your print. 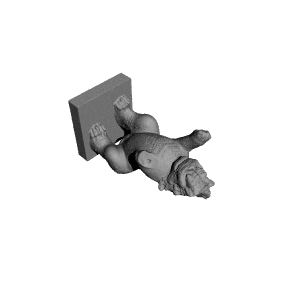 ×
2 collections where you can find Rearing Lion at The Guimet Museum, Paris by Scan The World