3D
Scan The World
3,300 views 84 downloads
1 collection
Community Prints Add your picture
Be the first to share a picture of this printed object
0 comments

This relief depicts a lion marching beside the coat of arms of the Cantirini family. The House of Contarini is one of the twelve founding families of the Venetian Republic, and were and remain through extended family consanguinity present in the Veneto's population, represented in over twenty auxiliary and cadet noble branches that include ranks currently among European sovereign, royal and aristocratic descendants. With the arrival of Alvise Contarini in Syracuse at the invitation of Martin I of Sicily a branch of the family was established in Sicily in 1394, the year in which Alvise married Cesarea Modica of Pietro Modica, Baron of San Giacomo Belmineo and Solarino. Alvise Contarini was given the fiefdoms of San Giacomo Belmineo and Solarino as part of the dowry. In 1406 he was elected Mayor of Syracuse, followed by numerous other communal, ministerial and military official positions for his descendants in the Kingdom of Sicily and the Kingdom of Italy after the Risorgimento. The family remains in Sicily today, carrying the title Duke of Castrofilippo.

853 AD marks the first officially verified documentation of the Contarini in the Republic of Venice, with Andrea Contarini named in the testament of Orso Partecipazio, son of Giovanni I Participazio. According to manuscripts in the Biblioteca Marciana and the family archives the Contarini claim direct descent of the Roman gens Aurelii Cottae through Publius Aurelius Cotta, son of Marcus Aurelius Cotta (consul in 74 BC and maternal uncle of Julius Caesar), who transferred his family to Padua. His grandson, Lucius Aurelius Cotta was elected prefect of the Reno; the area around the Reno near Bologna. His first and second son and his male grandchildren continued in this position and added the cognomen Reno, becoming Cotta Reno or Cottareno. The last person to register Cottareno was Marcus Aurelius Cottareno in Padua in 290 AD and subsequently the family name was written as Contareno, or Contarini in Venetian (both the Latin and Venetian denomination of the family name have been used interchangeably since). In 338 AD Marcus Aurelius Contareno (or Marco Aurelio Contarini in Venetian), prefect of Concordia under Constantine I, was the first Contarini to permanently move his residence to the Venetian area and later, another Marcus Aurelius Contareno -one of the twelve tribunes ruling the Byzantine district of Venice (Venetikà in the Exarchate of Ravenna)- elected the first Doge, forming the independent Republic of Venice.

In 1043 Domenico I was elected and became the first Doge in the family Contarini. By 1797, when the last Doge was forced to abdicate, the family had produced eight Doges of their own. The Contarini also counts various important diplomats, cardinals and navy commanders among them (in the famous Battle of Lepanto no less than 6 ships were commanded by Contarini). The Venetian Republic, in one form or another, lasted as a functioning independent state for over 1100 years until Napoleon's march into Venice sounded its demise.

The Contarini led the Venetian Republic forward through ever changing ages and commensurate with ample changes in trade, technology, trade: both import and exports, science, religion, art, banking and finance as well as in diplomacy and war. Many wealthy Venetians, such as the Contarini, enjoyed the monetary and health benefits wrought from, for example, the spice trade, which facilitated longevity, a fundamental requirement for assumption of the role of Doge, since the position mandated that a Doge, “must be an octogenarian who commands health, wealth and wisdom”. 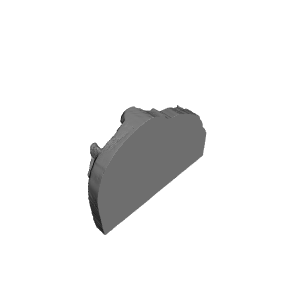 ×
1 collections where you can find Relief Fragment: Lion Marching with Contarini Coat of Arms by Scan The World