3D
360°
Scan The World
1,605 views 74 downloads
Community Prints Add your picture
Be the first to share a picture of this printed object
0 comments

This figure’s informal pose, balding pate, and small scale relative to the heron perched on top of the caged birds leave little doubt that it is not Kawab, the prince and owner of the tomb from which the relief came. Instead, he must be one of the overseers of Kawab’s estate. The birds - pintail ducks in the top cage and what may be wigeons below - represent the yield of a day’s fowling in the marshes. This stellar catch was undoubtedly achieved with the help of the heron, shown at rest with his neck curled into his shoulder. The ancient Egyptians domesticated herons and used them as decoys to attract other birds, a practice that continues today. The slightly curved line below the overseer’s feet indicates that he is on a small boat. Although this is all that remains, the entire scene may be reconstructed to include the capture of birds with a clapnet in the marshes, and a large-scale standing figure of Kawab, toward whom the skiff is heading.

Kawab’s tomb was one of the largest in the East Cemetery at Giza and was prominently located near the Great Pyramid built by his father, Khufu. The many tiny fragments that remain indicate that its exterior chapel was once decorated with a variety of scenes of life on the owner’s estate, including fowling and the herding and butchering of animals. Although this piece was executed in rather bold raised relief, others were cut in much lower relief. In all cases, subtle detail would have been added in paint, which unfortunately has not survived. Whoever destroyed the reliefs probably smashed the ten or twenty stone statues that were originally in the tomb as well.

It is likely that both Kawab’s father and wife outlived him. Although a space was prepared for Kawab’s mate in his mastaba, she was buried instead in the tomb of her next husband.

Provenance
From Giza, tomb G 7120. 1924: excavated by the Harvard University-Museum of Fine Arts Expedition; 1934: assigned to the MFA by the Egyptian government.
(Accession Date: December 1, 1924) 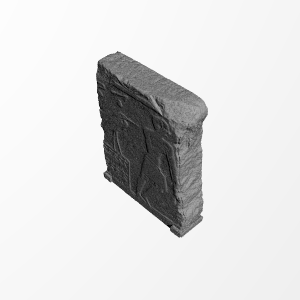