Relief of an Unidentified Man at the V&A, London

3D
Scan The World
3,103 views 206 downloads
1 collection
Community Prints Add your picture
Be the first to share a picture of this printed object
0 comments

Relief of an Unidentified Man at the V&A, London

The identity of the sitter remains unknown, but the fact that it is signed by Canova suggests it was a work of some note. It may have been a portrait of a friend of the sculptor, and was perhaps intended to form part of a larger sepulchral monument. On acquisition, it was thought this relief may have depicted Julius Caesar. However, later study of the relief ruled out this suggestion, as the portrait is not related to any known depictions of the Emperor. 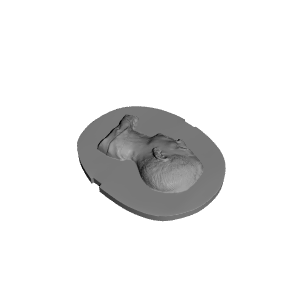 ×
1 collections where you can find Relief of an Unidentified Man at the V&A, London by vam