Relief of the Foundling hospital in Florence

3D
Scan The World
2,174 views 141 downloads
Community Prints Add your picture
Be the first to share a picture of this printed object
0 comments

Relief of the Foundling hospital in Florence

One of the most remarkable works by Andrea is the series of medallions with reliefs of the Infant Jesus in white on a blue ground set on the front of the foundling hospital in Florence. These child-figures are modelled with skill and variety, no two being alike.

We can see a little boy, but we do not know who he is. But we can deduce it is a little boy who have been cured in the hospital.

Andrea della Robbia (October 24, 1435 – August 4, 1525) was an Italian Renaissance sculptor, especially in ceramics. He carried on the production of the enamelled reliefs on a much larger scale than his uncle had ever done; he also extended its application to various architectural uses, such as friezes and to the making of lavabos, fountains and large retables. One variety of method was introduced in his enamelled work. Sometimes he omitted the enamel on the face and hands of his figures, especially in those cases where he had treated the heads in a realistic manner; as, for example, in the tympanum relief of the meeting of St Domenic and St Francis in the loggia of the Florentine hospital of San Paolo, a design suggested by a fresco of Fra Angelico's in the cloister of St Mark's. 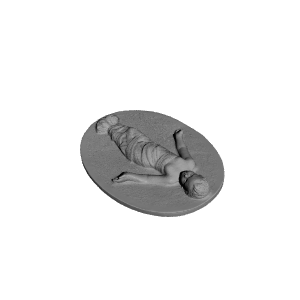