3D
Support Free Scan The World
2,484 views 84 downloads
Community Prints Add your picture
Be the first to share a picture of this printed object
0 comments

In Greek mythology, Persephone also called Kore or Cora  ("the maiden"), is the daughter of Zeus and the harvest goddess Demeter, and is the queen of the underworld. Homer describes her as the formidable, venerable majestic princess of the underworld, who carries into effect the curses of men upon the souls of the dead. Persephone was abducted by Hades, the god-king of the underworld. The myth of her abduction represents her function as the personification of vegetation, which shoots forth in spring and withdraws into the earth after harvest; hence, she is also associated with spring as well as the fertility of vegetation. Similar myths appear in the Orient, in the cults of male gods like Attis, Adonis and Osiris, and in Minoan Crete. 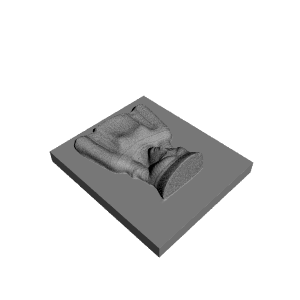 ×
0 collections where you can find Relief perhaps representing Persephone at The British Museum, London by Scan The World