3D
Scan The World
1,485 views 62 downloads
Community Prints Add your picture
Be the first to share a picture of this printed object
1 comments

This relief shows a figure of a man, according to the inscription presumably Domitian (51–96 AD), who was Roman emperor from 81 to 96. He was the younger brother of Titus and the son of Vespasian, his two predecessors on the throne, and the last member of the Flavian dynasty. During his reign, the authoritarian nature of his rule put him at sharp odds with the senate. He is shown here with uncharacteristically long hair, so the true identity of the character might be different. 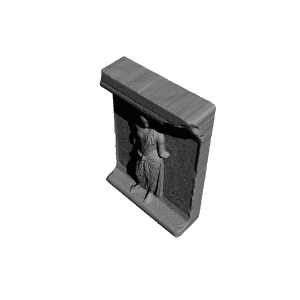