3D
Scan The World
1,709 views 76 downloads
Community Prints Add your picture
Be the first to share a picture of this printed object
0 comments

The bucolic atmosphere of the relief, with grazing animals, acts as the setting for a sacred scene:seated on a rock, to the left, Pan holds the syrinx, his flute, in his right hand, above a statue of Diana can be seen with her bow in a small temple, whose pediment is decorated with the myth of Actaeon attacked by his dogs. Landscape reliefs of this type, common from the early imperial period onwards, were used to decorated private buildings. This relief is dated to the second half of the 2nd century AD. 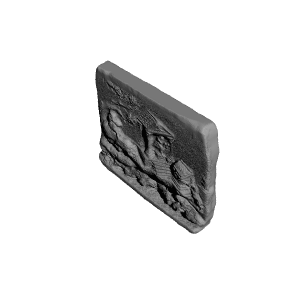