3D
360°
Scan The World
1,669 views 48 downloads
Community Prints Add your picture
Be the first to share a picture of this printed object
0 comments

Portrait head of a Prince of the Khufu Family - Husband(?) of 14.719. White limestone, with two lines of dark stone running through the neck and face. Corrosion on face around sides of nose. Both ears broken. A groove runs from the top of the head, near the front, to the base of the neck.

Provenance
From Giza, tomb G 4440. 1914: excavated by the Harvard University–Museum of Fine Arts Expedition; assigned to the MFA by the government of Egypt.
(Accession Date: July 2, 1914)

Reserve heads (also known as 'Magical Heads' or 'Replacement Heads') are distinctive sculptures made primarily of fine limestone that have been found in a number of non-royal tombs of the Fourth Dynasty of Egypt; particularly from the reigns of pyramid-building pharaohs Khufu to Khafre. Whilse each of the heads share characteristics in common with each other, the striking individuality of the pieces make them some of the earliest examples of portrait sculpture in existence. Their purpose is not entirely clear, but it is suggested that the head was made to serve as an alternate home for the spirit of the dead owner should anything happen to its body. 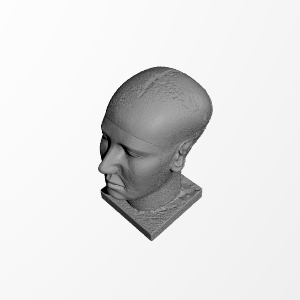