3D
Scan The World
1,773 views 50 downloads
Community Prints Add your picture
Be the first to share a picture of this printed object
0 comments

A rhinoceros, commonly abbreviated to 'rhino', is one of any five extant species of odd-toed ungulates in the family Rhinocerotidae, as well as any of the numerous extinct species. Two of the extant species are native to Africa and three to Southern Asia. The term "rhinoceros" is often more broadly applied to now extinct relatives of the superfamily Rhinocerotoidea.

Members of the rhinoceros family are some of the largest remaining megafauna, with all species able to reach or exceed one tonne in weight. They have a herbivorous diet, small brains (400–600 g) for mammals of their size, one or two horns, and a thick (1.5–5 cm) protective skin formed from layers of collagen positioned in a lattice structure. They generally eat leafy material, although their ability to ferment food in their hindgut allows them to subsist on more fibrous plant matter when necessary. Unlike other perissodactyls, the two African species of rhinoceros lack teeth at the front of their mouths, relying instead on their lips to pluck food. 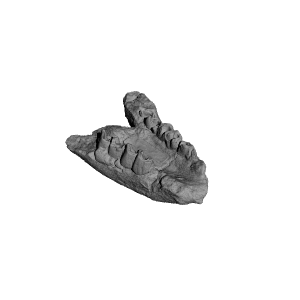 ×
0 collections where you can find Rhinoceros Jaw by fossilsinshropshire