3D
Scan The World
1,306 views 42 downloads
Community Prints Add your picture
Be the first to share a picture of this printed object
0 comments

Rhynchosaurs were a group of herbivorousarchosauromorphs that ranged all over the world in the Triassic Period. In some places, they were the most abundant plant eaters on land, and they made up an important part of terrestrial faunas before the rise of plant eating dinosaurs near the end of the Triassic.

The earliest rhynchosaurs were small, less than a meter long, and had narrow, wedge-shaped skulls and a few small, blunt teeth for eating plants. Some other early archosauromorphs, such as trilophosaurs, were also herbivorous. It is not clear whether rhynchosaurs were closely related to these other herbivores or not. In some studies, rhynchosaurs are found to be close relatives of choristoderes, which were mostly aquatic predators.

Found at Grinshill, Shropshire in the 1800s and part of a collection of material originally donated to Shrewsbury museum.

If you like this model or any others we produce we’d love to hear from you and how you’ve used them. 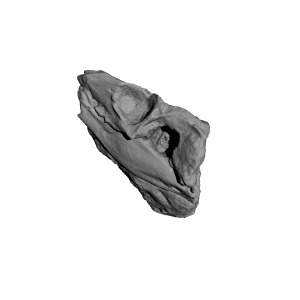