Riders at the Middelheim Museum

3D
Scan The World
3,464 views 233 downloads
Community Prints Add your picture
Be the first to share a picture of this printed object
0 comments

Riders at the Middelheim Museum

Umberto Mastroianni (born in Fontana Liri on September 21, 1910; died in Marino, Italy on February 25, 1998), was an Italian abstract sc.was one of Italy's leading sculptors. After the Second World War, he cornered the market in municipal monuments to the Italian Resistance - which he had participated in - but his towering, dynamic creations in steel and bronze also found a place in museums and sculpture-parks from Los Angeles to Tokyo. Mastroianni came from one of those families that breeds talent - all the more surprising as it was based in the rural backwater of Fontana Liri, in the mozzarella-belt of southern Lazio. His father Vincenzo was a master engraver, a craft that had been handed down from father to son for generations; his mother Luisa Conte was a cousin of the American actor Richard Conte. One of her grandsons, Marcello - Umberto's nephew - would go on to play with clay in his uncle's studio; later he remembered how Umberto had once made the family a Nativity scene out of snow).

Umberto travelled to Rome as a young teenager to study at the San Marcello art school and help out his uncle Domenico in his religious sculpture studio in Via Margutta, the Roman Montmartre. Two years later he was off to Turin, where he completed his apprenticeship with the sculptor Michele Guerrisi.Mastroianni thrived on the city's lively art scene, forming friendships with second-wave Futurists like Luigi Spazzapan, who became a sort of mentor for the younger artist. It was another painter, Filippo De Pisis, who obtained Mastroianni his first one-man show, held in Genoa in 1931. Through the Thirties, despite his Futurist sympathies, Mastroianni stayed resolutely figurative, sculpting lifesize bronzes in a pared-back classical manner close to that of Marino Marini. It was in 1942, as Italy's war effort began to disintegrate, that he finally embraced abstraction, developing a style that the critic Cesare Brandi would later define as "Cubist-Futurist". The dynamic fringe of both movements fascinated Mastroianni: his models were Duchamp's Nude Descending a Staircase No 2 and Boccioni's unfinished sculptural experiments. His first important public commission, the Turin Monumento ai Caduti ("Monument to the Fallen Soldier") of 1945-47, was the first of a number of such commemorative sculptures - those in Cuneo, Urbino, Cassino and Frosinone are the most significant - in which the values of the Resistance were incarnated in a solid energy of broken circles and tilting planes.

Mastroianni's neo-Futurist shift was sealed with an influential Parisian show in 1951. Later exhibitions at the Venice Biennale (where he won the sculpture prize in 1958), New York (1964), Florence (1981) and Tokyo (1989) confirmed his international reputation. Though he produced many gallery- sized works in various media - clay, marble, copper and wood - he was never happier than when given the chance to work in bronze or steel on a grand scale, as in the towering Cuneo Resistance monument (1964), "a mountain", wrote the painter, "which served to clear my mind and put those critical labels in perspective". In 1989, he received the first Praemium Imperiale for sculpture. During World War II, he was in the Italian resistance movement.  His last work was a pair of huge steel gates for Turin's Teatro Regio opera house, inaugurated in December 1994. The sculptor's long Turin residence ended in 1960, when he moved to Marino, in the Castelli Romani east of Rome. He set up house in a 16th-century palazzo which had once belonged to the poetess Vittoria Colonna, Michelango's muse. Towards the end of his life he himself turned to poetry; he also wrote occasional columns on art for the Rome daily Il Messaggero. In March 1987, he donated a group of 27 works to the Italian state, including a series of polychrome reliefs (they can be seen at the Galleria di arte moderna in Rome). Umberto Mastroianni was a big man with large, eloquent hands and an emphatic way of getting his point across. In moments of creative tension he would jump into his beloved Ferrari Dino and tear around the Castelli - even after he turned 80. Umberto Mastroianni, sculptor: born Fontana Liri, Frosinone, Italy 21 September 1910; married Ida Perlo; died Rome 25 February 1998. 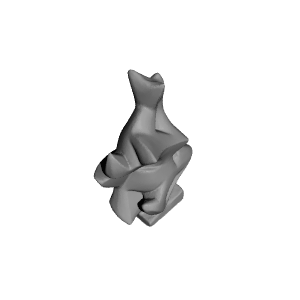