3D
Scan The World
5,451 views 501 downloads
2 collections
Community Prints Add your picture
Be the first to share a picture of this printed object
0 comments

La Rivière (The River) is a lead or bronze sculpture by Aristide Maillol. The sculpture itself is actually a lead cast made from a plaster mould that he created with the help of numerous apprentices. He bagan the mould for the piece in 1937 and completed it in 1943, at the age of 85. The casts were not made until 1948, however, two years after Maillol's death. The sculpture is unusual for Maillol, who ordinarily sculpted very composed, calm figures. La Riviere, by contrast, shows a woman in active contortion. The work was commissioned by a pacifist and writer named Henri Barbusse. Maillol conceived the piece as a testament to the perils of war: a woman stabbed in the back and falling, perhaps, or sheltering herself from an attack. The commission fell through but Maillol continued with the sculpture and called it La Riviere, resetting the theme by imagining the woman as a river goddess. Understanding the origins of the piece as a reflection on the violence of war, however, adds another dimension to the work - especially considering it was commissioned just prior to the Second World War, a time of great turmoil. 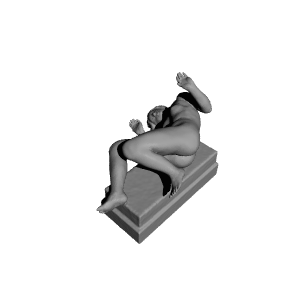 ×
2 collections where you can find River by Scan The World