3D
Scan The World
3,651 views 128 downloads
Community Prints Add your picture
Be the first to share a picture of this printed object
0 comments

Sir Robert Peel, 2nd Baronet (5 February 1788 – 2 July 1850) was a British Conservative statesman, who twice served as Prime Minister of the United Kingdom from 10 December 1834 to 8 April 1835, and again from 30 August 1841 to 29 June 1846. The son of a wealthy textile manufacturer, he served in many top offices over four decades. While serving as Home Secretary, Peel reformed and liberalised the criminal law, and created the modern police force, leading to a new type of officer known in tribute to him as "bobbies" (in England) and "peelers" (in Ireland). He cut tariffs to stimulate business; to replace the lost revenue he pushed through a 3% income tax. He played a central role in making Free Trade a reality and set up a modern banking system. Initially a supporter of legal discrimination against Catholics, Peel eventually supported the Roman Catholic Relief Act 1829, claiming "though emancipation was a great danger, civil strife was a greater danger". Peel has been criticised for his handling of the Irish famine. In 1834, Peel issued the Tamworth Manifesto, laying down the principles upon which the modern British Conservative Party is based. Peel often started from a traditional Tory position in opposition to a measure, then reversed himself and became the leader in supporting liberal legislation. This happened with the Test Act (1828), Catholic Emancipation (1829), the Reform Act of 1832, the income tax (1842) and most notably the repeal of the Corn Laws (1846). Therefore many critics said he was a traitor to the Tory cause, or "a Liberal wolf in sheep's clothing" because his final position reflected liberal ideas. Historian A.J.P. Taylor says:

Peel was in the first rank of 19th century statesman. He carried Catholic Emancipation; he repealed the Corn Laws; he created the modern Conservative Party on the ruins of the old Toryism.
This object is part of "Scan The World". Scan the World is a non-profit initiative introduced by MyMiniFactory, through which we are creating a digital archive of fully 3D printable sculptures, artworks and landmarks from across the globe for the public to access for free. Scan the World is an open source, community effort, if you have interesting items around you and would like to contribute, email stw@myminifactory.com to find out how you can help. 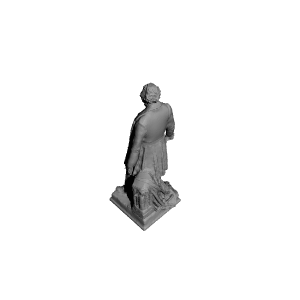 ×
0 collections where you can find Robert Peel at Parliament Square, London by Scan The World