3D
360°
Featured Scan The World
4,997 views 446 downloads
7 collections
Community Prints Add your picture
Be the first to share a picture of this printed object
0 comments

This sculpture, known as The Running Girl or the so-called "Atalanta Barberini", is a well preserved statue of a female athlete. The full-figure statue was housed in the Barberini Collection before being purchased by The Pio Clementino Museum (Vatican Museums, Inv. No. 2784) in 1772. It was then restored by Giovanni Pierantoni in 1783.

The girl is dressed in a short and light chiton that floats effortlessly against her frame. Her legs and right breast is exposed, almost in an Amazonian style.

She is considered a running athlete who has just won a competition, signified by her outreached arm approaching the palm brance which is carved onto the trunk to her left, a symbolic prize for victory.

Women were notoriously excluded from the Olympic games, but on rare occasions races for women were organised to honour the Goddess Hera at her temple in Olympia (Pausanias, 5, 16, 3).

Stylistically this Roman copy elegantly repeats the strict canons found in archaic and ionic Greek art styles, dating the original to around 460 BC. With this said, due to the absense of other replicas, some scholars consider the work as an autonomous neo-attic work, perhaps an invention from the circle of Pasiteles (mid-1st century BC); if making this claim, it must be remembered that in the Hadrianic age, it was considered normal to mix multiple styles together.

The mix of the archaic features, with the Hellenistic grace in the movement of the arms and legs, could be the fruit of the eclecticism of the Roman copyist.

Another reading of the work is that the athlete is actually Atalanta, a character in Greek mythology who was a virgin huntress who was unwilling to marry and loved by the hero Meleager. In a race had between Atalanta and Hippomenes, her rival drops golden apples which she cannot resist but pick up, thus losing the race. 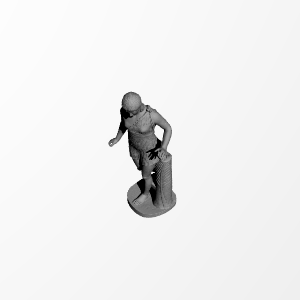 ×
7 collections where you can find Running Girl, the so-called "Barberini Atalanta" by SMK - Statens Museum for Kunst