3D
Scan The World
2,421 views 80 downloads
1 collection
Community Prints Add your picture
Be the first to share a picture of this printed object
0 comments

The inscription on the base of this Nike (ancient Greek for Victory), missing from this plaster cast, names the sculptor as Archermos. According to ancient sources he was the inventor of this type of figure, running and with wings. Her missing arms and legs would have been akimbo, a stylised way of showing figures running, often seen in depictions of Medusa.

The figure was found on the Cycladic island of Delos, the inscription a little afterwards. It may have stood on its own pillar or could have been an akroterion, a temple roof ornament; flying victory figures were favourite subjects for akroteria 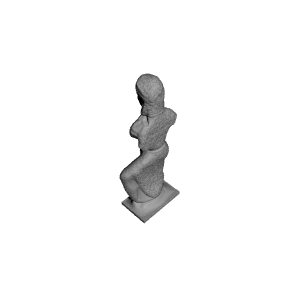