3D
Scan The World
2,904 views 264 downloads
Community Prints Add your picture
Be the first to share a picture of this printed object
0 comments

In 1848, Rogers settled permanently in Italy, where he became a prominent member of the Roman art community. "Ruth Gleaning," his first large-scale biblical subject, depicts the moment in the Old Testament book of Ruth when the Moabite woman kneels to glean grain in the field of her future husband, Boaz. Rogers drew inspiration for the pose from sculptures by his Florentine teacher Lorenzo Bartolini as well as from Greek and Roman prototypes, notably the "Kneeling Venus" at the Vatican. While Ruth’s idealized facial features and simplified hairstyle are highly classicized, the precise depiction of the stalks of grain and the foliage underfoot responds to a Victorian predilection for realistic anecdotal detail. 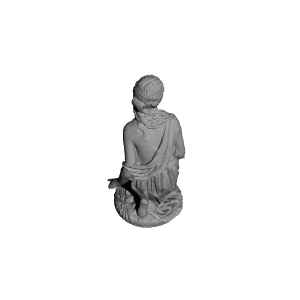