This full-figure relief, sculpted by an artist from Lombardia, depicts Saint Augustine. The work was produced at the end of the 13th century, built to be housed in the Church of Sant'Agostino.

Saint Augustine of Hippo (13 November 354 – 28 August 430 AD) was a Roman African, early Christian theologian and philosopher from Numidia whose writings influenced the development of Western Christianity and Western philosophy. He was the bishop of Hippo Regius in north Africa and is viewed as one of the most important Church Fathers in Western Christianity for his writings in the Patristic Period. Among his most important works are The City of God, De doctrina Christiana and Confessions.

The relief was donated by the Banca Popolare Cooperativa di Padova in 1899. 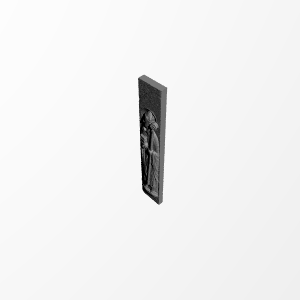