3D
360°
Scan The World
2,424 views 88 downloads
1 collection
Community Prints Add your picture
Be the first to share a picture of this printed object
0 comments

This is a statue of Saint Bartholomew.

Bartholomew was one of the twelve apostles of Jesus from ancient Judea. He has also been identified as Nathanael or Nathaniel, who appears in the Gospel of John when introduced to Jesus by Philip (who would also become an apostle),[Jn 1:43-51] although many modern commentators reject the identification of Nathanael with Bartholomew.

According to the Synaxarium of the Coptic Orthodox Church of Alexandria, Bartholomew's martyrdom is commemorated on the first day of the Coptic calendar (i.e. the first day of the month of Thout), which currently falls on September 11 (corresponding to August 29 in the Julian calendar). Eastern Christianity honours him on June 11 and the Roman Catholic Church honours him on August 24. The Church of England and other Anglican and churches also honor him on August 24.

In art Bartholomew is most commonly depicted with a beard and curly hair at the time of his martyrdom. According to legends he was skinned alive and beheaded so is often depicted holding his flayed skin or the curved flensing knife with which he was skinned. St Bartholomew is the most prominent flayed Christian martyr. During the 16th century, images of the flaying of Bartholomew were so popular that it came to signify the saint in works of art. Consequently, Saint Bartholomew is most often represented being skinned alive. Symbols associated with the saint include knives (alluding to the knife used to skin the saint alive) and his skin, which Bartholomew holds or drapes around his body. Similarly, the ancient herald of Bartholomew is known by "flaying knives with silver blades and gold handles, on a red field." As in Michelangelo’s Last Judgement, the saint is often depicted with both the knife and his skin. Representations of Bartholomew with a chained demon are common in Spanish painting. 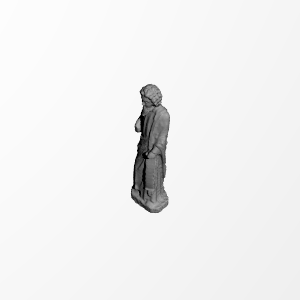