3D
Scan The World
2,994 views 177 downloads
Community Prints Add your picture
Be the first to share a picture of this printed object
0 comments

Saint Balthild of Ascania (Old English: Bealdhild, 'bold sword' or 'bold spear; around 626 – January 30, 680), also called Bathilda, Baudour, or Bauthieult, was the wife and queen of Clovis II, the king of Burgundy and Neustria (639–658). Her hagiography was intended to further her successful candidature for sainthood.

Tradition represents her as an Anglo-Saxon who was originally of elite birth, perhaps a relative of Ricberht of East Anglia, the last pagan king of East Anglia, although Pierre Fournet regards this as doubtful. Ricberht was ousted by Sigeberht, who had spent time as an exile in the Frankish court, during which he had been converted to Christianity. Sigeberht was established as the rightful heir to the throne with Frankish help. Balthild was sold into slavery as a young girl and served in the household of Erchinoald, the mayor of the palace of Neustria to Clovis.

This print is made on MakerBot Replicator Fifth Generation. The dimension of the model 100mm x 32mm x 31mm, Infill 10%, with support and layer high 0,2. Provide nice results! 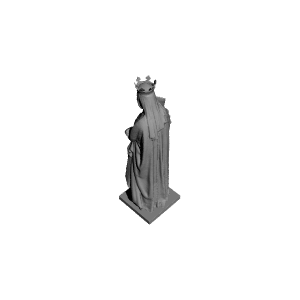 ×
0 collections where you can find Saint Bathild at The Jardin du Luxembourg, Paris by Scan The World