3D
360°
Scan The World
1,006 views 116 downloads
Community Prints Add your picture
Be the first to share a picture of this printed object
0 comments

Lafrance sculpted this statue depicting St. John the Baptist as a child.

He was a Jewish itinerant preacher who is revered as a major religious figure in many faiths who refer to him as a prophet. St John the Baptist is a recurrent theme in Christian art, mostly represented during his beheading. In this case, Lafrance interpreted him as a partially-naked child only wearing a poor fabric covering around his upper body.

Jules-Isidore Lafrance was born in 1841 and graduated at the  École nationale supérieure des Beaux-Arts. He won his first Grand Prix de Rome in 1870and obtained a gold medal at the Universal Exposition in 1878 in Paris.

This work was executed by Lafrance during his stay at Villa Medici in Italy, it was then acquired by the French state and exhibited at the Universal Exposition in 1878. This sculpture is now housed in the Musée D’Orsay. 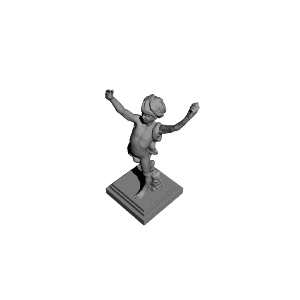