3D
Scan The World
4,401 views 199 downloads
1 collection
Community Prints Add your picture
Be the first to share a picture of this printed object
0 comments

Margaret the Virgin-Martyr, known as Margaret of Antioch (in Pisidia) in the West, and as Saint Marina the Great-Martyr in the East, is celebrated as a saint by the Roman Catholic and Anglican Churches on July 20 and on July 17 in the Orthodox Church. Her historical existence has been questioned. She was declared apocryphal by Pope Gelasius I in 494, but devotion to her revived in the West with the Crusades. She was reputed to have promised very powerful indulgences to those who wrote or read her life, or invoked her intercessions; these no doubt helped the spread of her cultus.

According to the version of the story in Golden Legend, she was a native of Antioch, and she was the daughter of a pagan priest named Aedesius. Her mother having died soon after her birth, Margaret was nursed by a pious woman five or six leagues from Antioch. Having embraced Christianity and consecrated her virginity to God, she was disowned by her father, adopted by her nurse and lived in the country keeping sheep with her foster mother (in what is now Turkey). Olybrius, Governor of the Roman Diocese of the East, asked to marry her but with the price of her renunciation of Christianity. Upon her refusal she was cruelly tortured, during which various miraculous incidents occurred. One of these involved being swallowed by Satan in the shape of a dragon, from which she escaped alive when the cross she carried irritated the dragon's innards. The Golden Legend, in an atypical passage of skepticism, describes this last incident as "apocryphal and not to be taken seriously" (trans. Ryan, 1.369). She was put to death in A.D. 304.

Saint Margaret, as Saint Marina, with associations to the sea, 'may in turn point to an older goddess tradition', reflecting the pagan divinity Aphrodite.

The Eastern Orthodox Church knows Margaret as Saint Marina, and celebrates her feast day on July 17. She has been identified with Saint Pelagia. "Marina" being the Latin equivalent of the Greek name "Pelagia" who, according to a legend, was also called Margarita. We possess no historical documents on St. Margaret as distinct from St. Pelagia. The Greek Marina came from Antioch, Pisidia (as opposed to Antioch of Syria), but this distinction was lost in the West.

The cultus of Saint Margaret became very widespread in England, where more than 250 churches are dedicated to her, most famously, St. Margaret's, Westminster, the parish church of the British Houses of Parliament in London. Some consider her a patron saint of pregnancy. In art, she is usually pictured escaping from, or standing above, a dragon.

She is recognized as a saint by the Roman Catholic Church, being listed as such in the Roman Martyrology for July 20. She was also included from the twelfth to the twentieth century among the saints to be commemorated wherever the Roman Rite was celebrated, but was then removed from that list because of the entirely fabulous character of the stories told of her. Margaret is one of the Fourteen Holy Helpers, and is one of the saints who spoke to Joan of Arc. 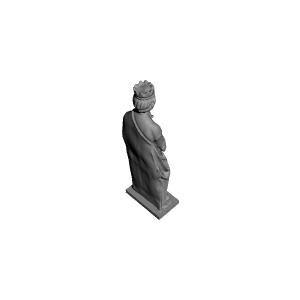 ×
1 collections where you can find Saint Margaret at The Petit Palais, Paris by Scan The World