3D
360°
Featured Scan The World
2,077 views 130 downloads
1 collection
Community Prints Add your picture
Be the first to share a picture of this printed object
0 comments

Pulpits at this date had two lecterns, one for reading the Gospels and the other for the Epistles (the letters of the epostles). The support on the left, with a man symbolising St Matthew, a lion for St Mark and ox for St Luke, relates to the Gospels. The lectern itself would have taken the form of an eagle, the symbol of St John. The other support includes St Paul, one of the authors of the Epistles.

This carving comes from a large sculpted pulpit, and would have appeared directly beneath a lectern. The three figures represent Saints Peter, Paul and James. Saint Paul is given prominence, because he was the author of the majority of the Epistles, from which readings would have been made at this lectern. Another carving acquired at the same time (Museum Number 5799-1859) would have acted as the support for the Gospel lectern, from which the gospel accounts of Christ's life were read during services. Both lectern supports may come from the same pulpit, now destroyed.

From the workshop of Nicola Pisano, Pisa, ca. 1270 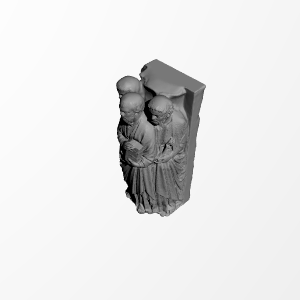 ×
1 collections where you can find Saints Peter, Paul and James by vam