Salvator Mundi (Savior of the World) is considered to be the last work created by the sculptor Gian Lorenzo Bernini. The sculpture, depicting Christ giving a benediction with his right hand raised, was carved by Bernini shorly before his death 'out of his devotion' to God, describing the work once finished as his 'Darling'. 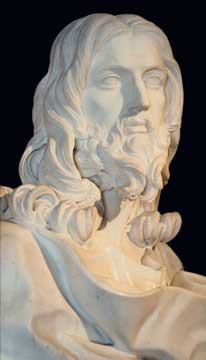 The shoulders wrapped in a mantle with the effect of satin, the very beautiful face framed by flowing hair and the right hand raised in blessing, a marble bust representing the Lord was hidden in the dimness of a niche. Carved in the wall of a small entrance to the monastery of Saint Sebastian outside the Walls, along the Via Appia Antica in Rome.
It seems that it is not just any old statue. Thanks to some lucky coincidences, in August 2001 some art historians recognized it as the Salvator mundi, the last work of Gian Lorenzo Bernini, the «great director of the Baroque», the “global” artist capable of warning whomsoever with a peremptory: «Don’t speak to me about anything small». Who, however, «at the end of his extraordinary existence», writes Claudio Strinati, specialist in seventeenth century Rome, as well as Superintendent of the Artistic and Historical Heritage of Rome, «closes his parabola in a silent meditation». So much so as to create «out of his devotion» a most beautiful bust of Christ considered affectionately by the old artist as his “Darling”.

Printed on the Blocks Zero with 0.2 layer height. With Polyalchemy grey. What incredible bust!!