3D
Scan The World
2,781 views 73 downloads
Community Prints Add your picture
Be the first to share a picture of this printed object
0 comments

In May 2016, a four meter tall statue of King Charles IV was erected on the Mill Colonnade in Karlovy Vary, Czech Republic. Since then it has become a yearly tradition to create a large sand sculpture to commence the spa season in the town.

This year's temporary piece commemorates the 100th anniversary of the founding of Czechoslovakia. It depicts the country's first president, Tomáš Garrigue Masaryk, on his favourite horse Hektor. The supportive bottom part of the sculpture shows the Prague skyline and Czechoslovak symbols: a map of the republic, the flag, crucial agreements and the badge of the Czechoslovak Legion.

The process of creation allows the otherwise fragile sculpture to survive at least a few months - wet sand is formed and built up to form the shape, while the details are added. It then gets waterproofed to help it stay together and resist the weather. 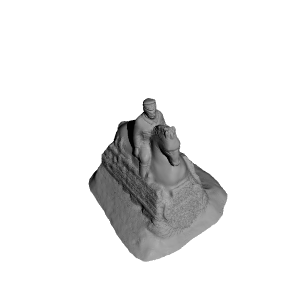