3D
Scan The World
3,568 views 115 downloads
Community Prints Add your picture
Be the first to share a picture of this printed object
0 comments

Saint James the Moor-slayer (Spanish: Santiago Matamoros also known asSan Tiago de Matamoros) is a famous Spanish mythological figure who helped the Christians defeat the Muslims in battle. According to legend, the Matamoros was Saint James, son of Zebedee, an apostle of Jesus Christ. Spanish legends recount his heroic appearance in the Battle of Clavijo on 23 May 844, in which Christians defeated the Moors (Muslims), to launch theReconquista ("Reconquest"). Historians agree the battle never happened and that he never appeared; the legends were invented centuries after the supposed event.

In the 1600s, followers of his cult (Santiaguistas) proposed the patronage of Spain under his name, in contrast to those who favored Saint Teresa of Avila. The Santiaguistas overcame and won this religious debate, naming him the Patron Saint of Spain until November 1760, when Pope Clement XIIIrescinded this honor and officially declared the Immaculate Conception as the patroness of Spain as a country, and installed the historical Saint James the Greater the patron of Spanish people. 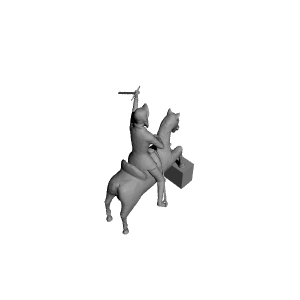 ×
0 collections where you can find Santiago Matemoros at San Cristóbal de las Casas, Mexico by Scan The World