3D
Featured Scan The World
3,235 views 153 downloads
4 collections
Community Prints Add your picture
Be the first to share a picture of this printed object
0 comments

Sappho (c. 630 – c. 570 BC) was an archaic Greek poet from the island of Lesbos. Sappho wrote lyric poetry and is best known for her poems about love and women. Most of Sappho's poetry is now lost, and what is extant has survived only in fragmentary form, except for one complete poem – the "Ode to Aphrodite". As well as lyric poetry, ancient commentators claimed that Sappho wrote elegiac and iambic poetry. Three epigrams attributed to Sappho are extant, but these are actually Hellenistic imitations of Sappho's style.

Sappho is one of Bourdelle’s best known compositions. Originally conceived in 1887, this monumental version was first cast in 1924. One of his monumental casts of this subject was exhibited in at the Jardin des Tuileries during his 1931 retrospective at the Musée de l’Orangerie in Paris. Peter Cannon-Brookes discusses the particular success of the present work: “One of the most architectonic of Bourdelle’s sculptures, the composition is developed wit the certainty of an architectural complex, and the sharply defined volumes, be they the simple bronze forms of the interpenetrating spaces, are linked together with the utmost clarity.... Sappho is intensely modern in its treatment, and the reduction of many forms to symbols demonstrates his closeness to contemporary developments in abstract sculpture” (Peter Cannon-Brookes, op. cit., p. 102). 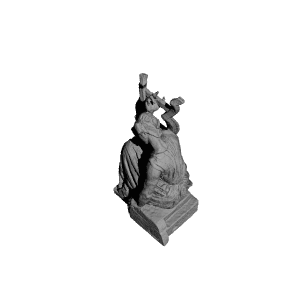