Sarcophagus (without lid) at The Getty Villa, Los Angeles

3D
Scan The World
3,007 views 203 downloads
Community Prints Add your picture
Be the first to share a picture of this printed object
0 comments

Sarcophagus (without lid) at The Getty Villa, Los Angeles

Four separate episodes from the life of the Greek hero Achilles decorate the sides of this Roman sarcophagus. The front shows Achilles desecrating the corpse of the fallen Trojan hero Hektor by dragging it behind his chariot. One short end shows Achilles putting on his armor, and the other shows Odysseus discovering Achilles hiding among the daughters of King Lykomedes on Skyros. The unfinished back of the sarcophagus shows a battle of Greeks and centaurs. This scene probably also refers to the life of Achilles, since he was educated by the centaur Chiron. The life of Achilles was a popular subject for the decoration of Roman sarcophagi.

On the lid, a man and a woman recline on an upholstered couch. As was the common practice, the heads of the figures were left unfinished so they could be carved as portraits of the deceased when the sarcophagus was purchased. In this instance, however, the portraits were never completed; the reason is unknown.

Burial in a sarcophagus was a popular custom during the period from about 150 to 250 A.D. Sarcophagi were mass produced in a few centers, one of which was Athens. Athenian sarcophagi were carved on all four sides and often surmounted with reclining figures. 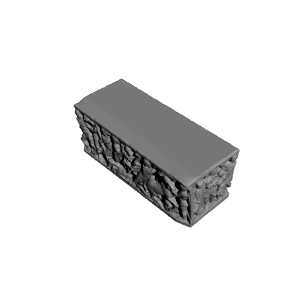 ×
0 collections where you can find Sarcophagus (without lid) at The Getty Villa, Los Angeles by Scan The World