3D
Scan The World
4,451 views 447 downloads
3 collections
Community Prints Add your picture
Be the first to share a picture of this printed object
0 comments

This is one of the four groups of scenes of abduction (much like 'Boreas Abducting Orithya' by the Marsy brothers, on Scan the World!) created to decorate the ponds of the Park of Versailles, designed by the painter Charles Le Brun in 1674 as a commission for Louis XIV. The two large groups represent the four elements, this one depicts the Earth, which would have been placed close to many other groups of four sculpture sets representing: The elements, The continents, The temperaments of man, The hours of the day, The Poems and The Seasons (many of which can be found here on Scan the World).

In this sculpture The Earth is represented by the Goddess Cybele, accompanied by her symbolic lion, being abducted by Saturn (or Chronos) to create the twelve gods of Olympus. Created by French sculptor Thomas Regnaudin between 1675 - 1687, this marble was placed in the Orangerie in the gardens of The Palace of Versailles in 1687 before being brought to the circular basin of the Tuileries Garden. It was restored between 2004-2006 and is now on permanent display in the French scukpture room of The Louvre. 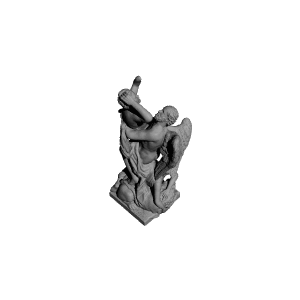 ×
3 collections where you can find Saturn Abducting Cybele at The Louvre, Paris by Scan The World