3D
360°
Scan The World
1,236 views 58 downloads
1 collection
Community Prints Add your picture
Be the first to share a picture of this printed object
0 comments

This is a screen slab showing King Psamtek I. On this side Psamtek kneels making offerings to fearsome-looking deities, including a double-headed bull god and a snake. The majority hold long knives, as they were meant to guard a sacred space located behind this wall.

Most Egyptian depictions of people are high idealised, but here the king's unflattering features suggest a rare attempt at true portraiture. This deviation from the norm is repeated on a similar screen slab made three centuries later. Both slabs were part of one structure in the temple of Atum at Heliopolis. The bottom design is a 'palace facade'. The frieze of cobras at the top represents Wadjyt, heraldic goddess of Lower Egypt. The reverse had a frieze of vultures: Nekhbet of Upper Egypt. That side also showed Psamtek offering, but there his figure, now effaced, was more prostrate. 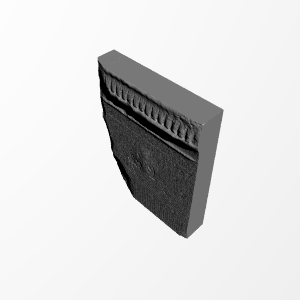