A rare example of an Egyptian temple sculppture in which the figures face in four directions, suggesting the piece would have stood in the middle of a room. Three of the figures are represeted here twice. King Thutmose III (who is headless due to damage) stands hand-in-hand with the god Montu-Ra (with a falcon head), and the goddess Hathor. By touching the pharaoh's hands, they infuse him with supernatural power.

Thutmose reigned in the 18th Dynasty, dating this piece to around 1479-1425 BC. It was found in the temple of Amun-Ra in Thebes. 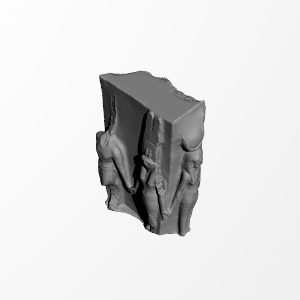