3D
360°
Scan The World
1,044 views 45 downloads
1 collection
Community Prints Add your picture
Be the first to share a picture of this printed object
0 comments

A male figure in polished green serpentine or jade. This sculpture has its origins in the Olmec civilisation, the most ancient in Mesoamerica. Carvings left by Olmec masons suggest a society based on centralized political and religious authority. Distinctive features of carvings include many of those exibited in this statue, such as snarling mouth and prominent thick upper liip, toothless gums, bent legs, a flat nose and a proportionally large and bald head with cranial deformations. This figure is similar to those found in an elaborate burial at the formative site, La Venta. This example differs in its apparent mutilation of the arms and head, a practice commonly related to the abandonment of Olmec sites. 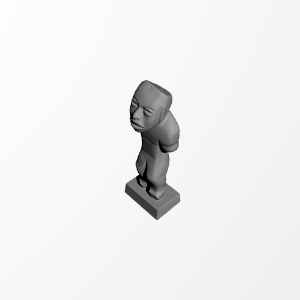 ×
1 collections where you can find Sculpture, Olmec Man by HuntMuseum