Seated Figure of Xiuhtechtli at The British Museum, London

Seated Figure of Xiuhtechtli at The British Museum, London

In Aztec mythology, Xiuhtecuhtli ("Turquoise Lord" or "Lord of Fire"), was the god of fire, day and heat. He was the lord of volcanoes, the personification of life after death, warmth in cold (fire), light in darkness and food during famine. He was also named Cuezaltzin ("flame") and Ixcozauhqui and is sometimes considered to be the same as Huehueteotl ("Old God"), although Xiuhtecuhtli is usually shown as a young deity. His wife was Chalchiuhtlicue. Xiuhtecuhtli is sometimes considered to be a manifestation of Ometecuhtli, the Lord of Duality, and according to the Florentine Codex Xiuhtecuhtli was considered to be mother and father of the Gods, who dwelled in the turquoise enclosure in the center of earth.

The Nahuatl word xihuitl means "year" as well as "turquoise" and "fire", and Xiuhtecatl was also the god of the year and of time. In the 260-day ritual calendar, the deity was the patron of the day Atl ("Water") and with the trecena 1 Coatl ("1 Snake"). Xiuhtecuhtli was also one of the nine Lords of the Night and ruled the first hour of the night, named Cipactli ("Alligator"). Xiuhtecuhtli was the patron god of the Aztec emperors, who were regarded as his living embodiment at their enthronement. The deity was also one of the patron gods of the pochteca merchant class.

Stone sculptures of Xiuhtecuhtli were ritually buried as offerings, and various statuettes have been recovered during excavations at theGreat Temple of Tenochtitlan with which he was closely associated. Statuettes of the deity from the temple depict a seated male with his arms crossed. A sacred fire was always kept burning in the temples of Xiuhtecuhtli. In gratitude for the gift of fire, the first mouthful of food from each meal was flung into the hearth. 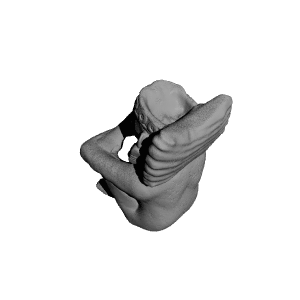 ×
0 collections where you can find Seated Figure of Xiuhtechtli at The British Museum, London by Scan The World
×
Tim James
@btcvideo
1
Printed on: Monoprice Maker Select V2
Material: PLA
Posted at: 29th September 2022