3D
Scan The World
3,832 views 321 downloads
2 collections
Community Prints Add your picture
Be the first to share a picture of this printed object
0 comments

This statue was probably the most celebrated work of art discovered at Herculaneum at the eighteen century.

Hermes (/ˈhɜːrmiːz/; Greek: Ἑρμῆς) is an Olympian god in Greek religion and mythology, the son of Zeus and the Pleiad Maia, and the second youngest of the Olympian gods (Dionysus being the youngest).

Hermes is considered a god of transitions and boundaries. He is described as quick and cunning, moving freely between the worlds of the mortal and divine. He is also portrayed as an emissary and messenger of the gods; an intercessor between mortals and the divine, and conductor of souls into the afterlife. He has been viewed as the protector and patron of herdsmen, thieves, oratory and wit, literature and poetry, athletics and sports, invention and trade, roads, boundaries and travelers.

In some myths, he is a trickster and outwits other gods for his own satisfaction or for the sake of humankind. His attributes and symbols include the herma, the rooster, the tortoise, satchel or pouch, winged sandals, and winged cap. His main symbol is the Greek kerykeion or Latin caduceus, which appears in a form of two snakes wrapped around a winged staff with carvings of the other gods.

In the Roman adaptation of the Greek pantheon (see interpretatio romana), Hermes is identified with the Roman god Mercury, who, though inherited from the Etruscans, developed many similar characteristics such as being the patron of commerce.

Lysippos (/laɪˈsɪpɒs/; Greek: Λύσιππος) was a Greek sculptor of the 4th century BC. Together with Scopas and Praxiteles, he is considered one of the three greatest sculptors of the Classical Greek era, bringing transition into the Hellenistic period. Problems confront the study of Lysippos because of the difficulty of identifying his style among the copies which survive. Not only did he have a large workshop and a large number of disciples in his immediate circle, but there is understood to have been a market for replicas of his work, supplied from outside his circle, both in his lifetime and later in the Hellenistic and Roman periods 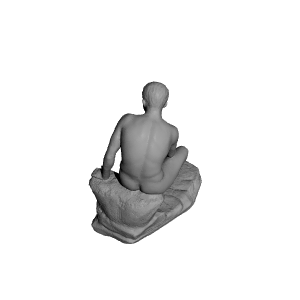