Semiramis at The Dallas Museum of Art, Texas

3D
Scan The World
4,074 views 219 downloads
1 collection
Community Prints Add your picture
Be the first to share a picture of this printed object
0 comments

Semiramis at The Dallas Museum of Art, Texas

Carved from a single block of marble, this imposing statue of a brooding queen is a fictional portrait of Semiramis (seh-MIR-ah-miss), queen of Assyria around 800 B.C. Although a historical figure, by the late 19th century Semiramis had become the stuff of legend: an ambitious woman who seized power through the murder of her husband, before being killed by her own estranged son. This view was popularized through the French philosopher Voltaire's 1784 play and the Italian composer Rossini's 1822 opera, both of which helped inspire William Wetmore Story's composition. 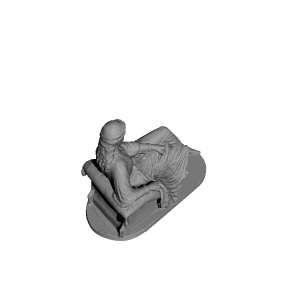 ×
1 collections where you can find Semiramis at The Dallas Museum of Art, Texas by 3DLirious