3D
Scan The World
2,488 views 137 downloads
Community Prints Add your picture
Be the first to share a picture of this printed object
0 comments

This is a statue of Shiva, one of the principal deities of Hinduism, Supreme Being within Shaivism, one of the major traditions within contemporary Hinduism. Shiva is the God of Destruction, Destroyer of Evil, God of Yoga, Meditation and Arts.

Shiva is depicted in his classic seated pose with four arms holding a trident and a small drum among other emblems that symbolise objects worshipped independently of the divine image with which they are associated.

This statue was made during the Hoysala period when worship of Shiva was at its peak. 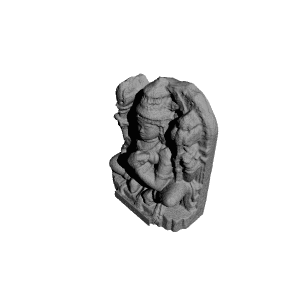 ×
0 collections where you can find Shiva by Scan The World