Shrine Figure of a Mother and Child at The Sainsbury Centre for Visual Arts, Norwich

3D
Scan The World
4,467 views 142 downloads
1 collection
Community Prints Add your picture
Be the first to share a picture of this printed object
0 comments

Shrine Figure of a Mother and Child at The Sainsbury Centre for Visual Arts, Norwich

This figure shows a mother carrying a child on her back, holding a pot, and resting on a stool. She displays a sophisticated coiffure with two feathers carved on either side. There are scarification marks down either side of the face and the eyes are inlaid with a circular metal plate driven in by nails, although the left plate is missing. She is wearing a string of blue beads round the neck where further scarification marks or a representation of a necklace are visible. There is significant encrustation on the surface of this figure excluding the face, which is particularly smooth. There is evidence of erosion of the circular base at the front and rear.

This superb shrine figure is from the immediate neighbourhood of Oshogbo, one of the finest of the Yoruba carving centres. A comparable figure, possibly by the same hand, is illustrated by Beier, and another is seen in the distance being carried on the head in the annual Festival of Images at Ilobu (Beier, 1957). A great number of fine carvers flourished in Oshogobo itself and in Ilobu and Erin, the last perhaps the most important of all, being the seat of the principle carvers known to us by name, Maku and his son Toibo (neither of whom seems to have been the carver of this piece).
The excellent condition of the piece, seeming to belie its probable age (perhaps eighty years), suggests that, wherever it was carved, its home may have been at Ilobu. According to Beier these images, none of which was privately owned but all kept in orisha houses, were devotedly cleaned and washed once in every four-day Yoruba week. Additionally, they were painted with indigo or camwood, both insect deterrents.
Orisha constitutes a religious concept that can be equivalent to a god, a deity or a saint. While the Yoruba believe in a Great God, he is too far from human understanding for direct worship, and thus had no shrines or sacrifices. Usually an orisha is an ancestor, hero or former king who manifests some aspect of divine power or ia allied to a force of nature such as thunder, storm, or a river (Fagg and Pemberton: 1982). Orisha are rarely depicted in person; a carving will be of a priest or devotee. The carving itself is never worshipped; it is a symbol of the spiritual being and as such has no direct part in ceremony is, nor does it arouse awe. The inclusion of a coiled mudfish in the design of the stool probably indicates that it is an acceptable sacrifice to the orisha (but apparently does not have a correlation with royalty, as it has in Benin). 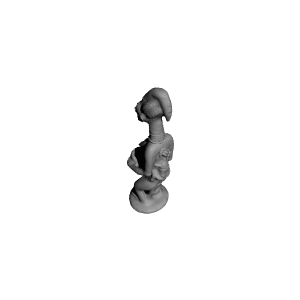 ×
1 collections where you can find Shrine Figure of a Mother and Child at The Sainsbury Centre for Visual Arts, Norwich by Scan The World