Simhavaktra at the Guimet Museum, Paris

3D
Scan The World
2,549 views 137 downloads
Community Prints Add your picture
Be the first to share a picture of this printed object
0 comments

Simhavaktra at the Guimet Museum, Paris

Simhavaktra means “lion faced” or “lion headed,” and a dakini is a “sky-walker”—an inhabitant of the realm of the sky in the mind.
Created in China during the 1700s, Simhavaktra’s style nonetheless reflects strong Tibetan influence. Such cross-cultural influences have historically been common in Himalayan forms of Buddhism.
Simhavaktra balances deftly, despite her apparently awkward posture. To successfully create a sculpture of this type, extremely high levels of artistic skill were necessary. Indeed, Simhavaktra is one of only two comparable sculptures still extant in the world.
Symbolic details abound on Simhavaktra, but perhaps her most startling feature is the dakini’s ferocious appearance.

The Dakini in Tibetan Buddhism

With her flaming hair and human skin cape, Simhavaktra might seem violent and scary. But here she is a force for good; the dakini’s fierce appearance symbolizes her power to overcome obstacles to enlightenment, such as lust, anger or ignorance. Every aspect of the statue conveys deep meaning. For example, her flaming hair symbolizes the blazing fire of her wisdom. The human skin cape symbolizes the stripping away of the veil of illusion from perception. Even Simhavaktra’s jewelry is symbolic. Her two bracelets, two armlets and necklace symbolize the Five Buddhas who preside simultaneously over the cardinal directions of the cosmos (four directions plus central axis) and the negative components of ordinary human psychology (lust, hatred, delusion, pride and jealousy). If you look at Simhavaktra’s forehead, you’ll see a wonderful, gleaming third eye that indicates she’s able to see past these same negative forces.
This object is part of "Scan The World". Scan the World is a non-profit initiative introduced by MyMiniFactory, through which we are creating a digital archive of fully 3D printable sculptures, artworks and landmarks from across the globe for the public to access for free. Scan the World is an open source, community effort, if you have interesting items around you and would like to contribute, email stw@myminifactory.com to find out how you can help.
Show more Show less
License
Technical Information
More Information
Object Parts
Remixes Add your Remix
Show more
Interesting objects for you
Show more 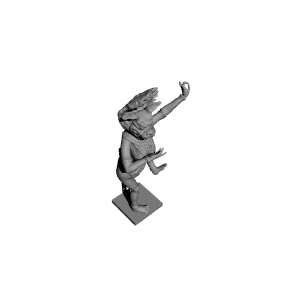 ×
0 collections where you can find Simhavaktra at the Guimet Museum, Paris by Scan The World